We’re in the Army Now!

That’s right, our own Heather Krygoski is now Specialist E4 playing Euphonium in the 3rd Infantry Division at Fort Stewart-Hunter Army Airfield in Georgia. We sat down with her recently to get the scoop.

How did she get there?

Heather attended Mt. Olive High School in northwestern New Jersey. She followed that with a Bachelor’s degree in Music Education from Montclair University. That’s where the “seed was planted” by her euphonium teacher Jason Ham, who played in the West Point Band. After graduation, Heather determined that education was not for her, so she decided to get even better on her instrument with a Master’s degree in Music Performance at Rutgers University. Heather also honed her euphonium and trombone skills playing in the Hanover Wind Symphony for six years.

First of all, the Army has more bands available to play in. U.S. Army Bands are comprised of 20 active duty Regional Bands, 13 Army Reserve Bands, 51 Army National Guard Bands, and four Premier Bands, each with its own unique mission and qualifications. Heather also knew others who went through the process of getting into the Army bands. Lastly, she spoke with a recruiter during her last semester at Rutgers.

For the Army Reserves, the audition is for your state. For active duty, you audition in general, and if accepted, continue for a particular band they recommend for you (basically who needs your instrument). Once accepted, you start off with 10 weeks of Basic Training, after all, you are a soldier first! Then it’s another 10 weeks at the Army School of Music in Virginia Beach to learn how to be an Army musician and with lots and lots of practicing!

As a member of a U.S. Army Band, there is the opportunity to play in various ensembles offered in each band, including concert band, ceremonial bands, marching band, brass and woodwind quintet, jazz combo, rock and pop group or New Orleans style brass band.

Heather is now stationed at Fort Stewart for the next three years. The band there runs itself, with each person having a specific job (duty) to run the group. Her daily routine includes exercise, practicing – individually and in groups, performances, and her duty. There is also the possibility to do a little doubling on trombone. 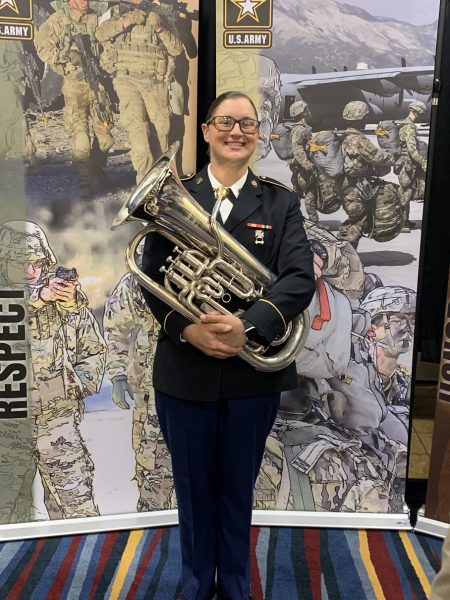 Heather is very excited to be performing for a living in such a top tier organization. She looks forward to the opportunities to travel, meet new people, and hopes to make this a career.

All of us in the Hanover Wind Symphony wish Heather Krygoski all the best and will catch up with her again down the road.